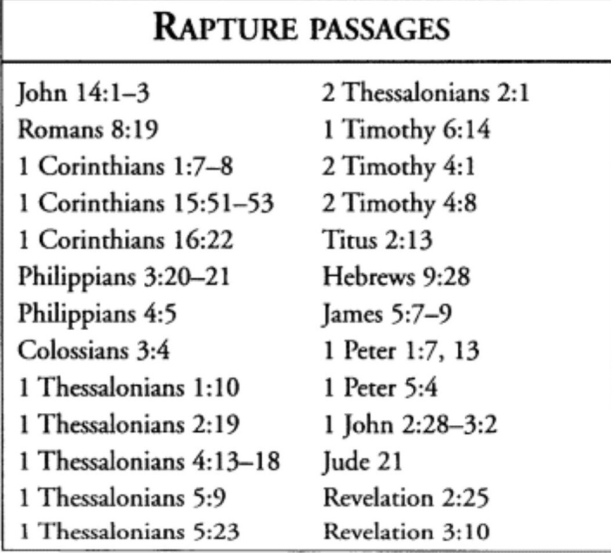 Today we will continue to examine this list of Scriptures that we are told are specific to, and thus prove a separate Rapture.

One thing that theologians seem to forget when trying to understand scripture, is the fact that the Holy Spirit is the teacher through these writings, and where a question may arise in one of the letters; it is bound to be answered in another. The Holy Spirit knows our questions before we ask. He knew that the last Trumpet in this passage would not, and could not be the last Trumpet if the rapture were to occur before the Tribulation. Why? — because He knew that He would be relating to us the Seven trumpets of Revelation. So He being the Holy Spirit and God would obviously know that only a few more words would clear up this matter. But the words “for the Church Bride”, are missing. By allowing the absence of just these few words He has, in fact, brought about the scriptures own definition of the last Trumpet. Not only is Revelation 11’s last Trumpet the last recorded in scripture, but the definition accompanying it requires the very resurrection that Paul has been teaching us about in 1 Cor. 15.

So, what is the mystery here of which Paul speaks? As stated, Paul had been discussing the Resurrection. The readers of his letter knew something of the resurrection. It was promised in the scriptures. Even in the Old Testament scriptures. Jesus had been resurrected, Lazarus had been resurrected. But Lazarus would die again, maybe he had died already. Men could speculate what resurrection meant just as men do today concerning who is the Antichrist. What Paul revealed in this mystery cleared up some speculation and of course brought about other. What was cleared up was twofold. Not everyone will die before Jesus returns, but all must become immortal coinciding with this resurrection. What this does not say is that this resurrection is another part of that first resurrection, as the folks in the pre-Trib camp teach. What could still be unclear at this point is the question of the timing of planned resurrection for good versus evil men. The questions that could arise is— were are all men both good and evil to become immortal at this time? Or were evil people also to become immortal at all?Some of this is addressed in verses 47-48, but not completely answered. But The Revelation clears up the timing of first vs. second resurrection just as it has cleared up the last Trumpet. Revelation itself clarified both. Dispensationalists accept one of these but not the other. So, still men speculate.

So. again although this is a Rapture passage, it is not clearly a set of pre-Trib Rapture verses as we are told here. So now we move on.

Let anyone who has no love for the Lord be accursed. Our Lord, come! (NET)

This is always listed by Dispensationalists as a pre-Trib rapture verse, it calls for our Lord to come. There is no distinction made in this between the Rapture and the Lord’s second coming which, of course be the case with a post-Trib Rapture. In fact Paul here calls for the Lord’s coming.

We will continue with these passages in part 3.