For the Lord God is a sun and shield; The Lord gives grace and glory; No good thing does He withhold from those who walk uprightly.

Do men walk uprightly because they are preprogrammed by God to do so, or because they have obediently chosen to accept and walk in God’s grace offered as a free gift?

Now when the meeting of the synagogue had broken up, many of the Jews and of the God-fearing proselytes followed Paul and Barnabas, who, speaking to them, were urging them to continue in the grace of God.

If Paul believed in a doctrine of once one is saved that then that one will always remain saved; or in a doctrine of man’s predestination unto salvation; then why do both he and Barnabas urge these, who obviously had begun walking in God’s given gift of Grace, to also continue in that Grace? Would not that continuous walk be a given for one who is predestined? Or stated another way for one who has begun that walk by accepting this gospel of Grace, if as many state — once saved always saved?

Therefore they spent a long time there speaking boldly with reliance upon the Lord, who was testifying to the word of His grace, granting that signs and wonders be done by their hands.

24. But I do not consider my life of any account as dear to myself, so that I may finish my course and the ministry which I received from the Lord Jesus, to testify solemnly of the gospel of the grace of God. 32. And now I commend you to God and to the word of His grace, which is able to build you up and to give you the inheritance among all those who are sanctified.

God’s Grace to us of His word, both written, and as manifest in His Son, is able to build us up and give us the inheritance among the sanctified.

Notice, that Paul teaches here that to be commended to God’s Grace means that you have entered into a building process that is able to give you an inheritance among the sanctified. The goal is our sanctification.

John stated this same message to us in 1 John:

but if we walk in the Light as He Himself is in the Light, we have fellowship with one another, and the blood of Jesus His Son cleanses us from all sin. 1 John 1:7 NASB

Was John consistent in this thinking?

But as many as received Him, to them He gave the right to become children of God, even to those who believe in His name, who were born, not of blood nor of the will of the flesh nor of the will of man, but of God. John 1:12-13 NASB

Grace is a gift from Heavenly Father given through His Son, Jesus Christ. The word grace, as used in the scriptures, refers primarily to enabling power and spiritual healing offered through the mercy and love of Jesus Christ. … The grace of God helps us every day. The wikipedia definition of Grace.

“Why do you spend money for what is not bread, And your wages for what does not satisfy? Listen carefully to Me, and eat what is good, And delight yourself in abundance.

“ Incline your ear and come to Me. Listen, that you may live; And I will make an everlasting covenant with you, According to the faithful mercies shown to David. “Behold, I have made him a witness to the peoples, A leader and commander for the peoples. “Behold, you will call a nation you do not know, And a nation which knows you not will run to you, Because of the Lord your God, even the Holy One of Israel; For He has glorified you.” Seek the Lord while He may be found; Call upon Him while He is near. Let the wicked forsake his way And the unrighteous man his thoughts; And let him return to the Lord, And He will have compassion on him, And to our God, For He will abundantly pardon.

This is God’s call to each one of us. We are all His creation. We are all owned by God. He calls on us a rebellious people without Him to return to Him. He is sovereign and has reserved the right to determine each one’s destiny, based upon each one’s response to His plan for mankind. Jesus has stated:

12 “Behold, I am coming quickly, and My reward is with Me, to render to every man according to what he has done.

His call is out there today. It is there in His word, it is offered up in He who is The Son, who is The Word. Today is the day of salvation. God has already predestined your future, but it is based on what you have done with Him and in Him. If you heed His call and follow Him your lot will be with those who abide in Him for eternity. If you heed not His call your lot is sealed by your own decision to be for now and throughout eternity severed from the inheritance offered in Him. You are predestined without Him to pay for your own sin.

Take pains with these things; be absorbed in them, so that your progress will be evident to all. Pay close attention to yourself and to your teaching; persevere in these things, for as you do this you will ensure salvation both for yourself and for those who hear you. 1 Timothy 4:15-16 NASB

The Photo is from Michael Jeshurun’s blog. As is the inspiration for this post. 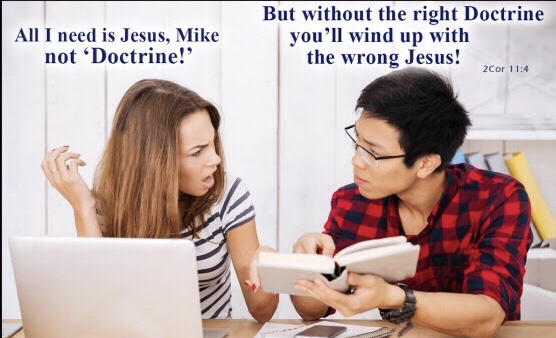 3 thoughts on “Yes! Doctrine Does Matter”