This is a new version of the Bible, and it is further proof of man’s willingness to do most anything to show himself faultless in the eyes of his fellow man and perhaps to quench his own conscience. In order to change the Biblical language one must ignore The God of the Bible, and remake Him as well. But the making of one’s own God is a tradition coming from the ancients.

The claim with Queen James is that before 1942 there was never a reference in the King James Bible to homosexuality being called sin, and the proof is that translation errors were introduced into the King James translation of scripture at that time by manipulating the text in 5 different verses of scripture. So the Queen James version corrects these translation errors, and now homosexuality requires no repentance before God, thus homophobia is the true sin.

You may believe this or want to believe this because after all we are all God’s children, you say, and God is really incapable of feeling anything but love for His children. If this is the case you really need to rewrite more of the Bible than just these 5 verses. Jesus after all is God’s only begotten Son, and Jesus said in John 3:16, For God so loveth the world, that he hath given his only begotten Son, that whosoever believeth in him, should not perish, but have everlasting life.

And then He said that He was the light sent to the world, and in John 3:20 For every man that evil doeth, hateth the light, neither cometh to light, lest his deeds should be reproved.

If those verses sound a little strange it is because they come from the 1599 Geneva Study Bible, and yes the words were a bit different sounding back then, but we can still understand them, and when you read the 5 verses that were changed in the Queen James Gay Bible from this same 1599 version of the Geneva Bible you will also be able to understand that being a homosexual is a sin before God, just like adultery, and murder, and stealing and lies are all sins before God.

And therefore Jesus would still say: John 3:20 For every man that evil doeth, hateth the light, neither cometh to light, lest his deeds should be reproved.

We are given the free will by God to cut verses from the Bible or to change verses in the Bible, or to even write our own version of the Bible, but in the end we will still stand before the Judge who knows our every action.

Man calls believing the Bible concerning homosexual acts homophobia, God calls it spreading the gospel, which is the good news that Jesus loved you enough to die in your place for your sin and mine, but without repentance there is no forgiveness of sin, and without recognizing your sin there can be no repentance. Changing Gods Word is equivalent in eternity to digging one’s own grave and laying down in it while they fill it over with a ton of dirt. Only in eternity God pronounces the sentence. You don’t get to do it. 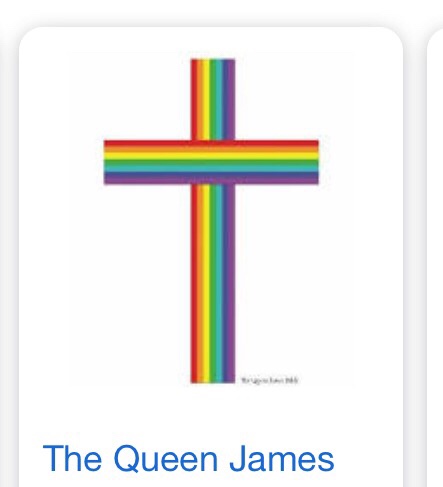 3 thoughts on “The Queen James Bible”