One scripture that came up was the last Trumpet in Revelation 10 and 11. The point was made that this could not be the last trumpet spoken of by Paul in 1 Corinthians 15, because the Revelation trumpet was unknown at the time of Paul’s writing to the Corinthians.

But is this the way that the Holy Spirit teaches us? Does He explain all truth in any one given passage, or does He expect us to study all of scripture to learn what truth is? Were the Corinthians expected to know what the last trumpet represented? Remember the Corinthians were Gentiles. In this passage Paul had merely told them that there would be a “last Trumpet” and that it would sound when Jesus returned for Those who are in Him who would be made immortal upon its sounding. This passage did not relate this trumpet to any other trumpet that would have been known to Paul, or to the Jews, or to the Corinthians. The passage merely says that there is a last Trumpet to be sounded at Jesus coming. So this Trumpet then prompts speculation as to its further meaning. It is speculated by some that it is the last Trumpet of Rosh Hashanah: 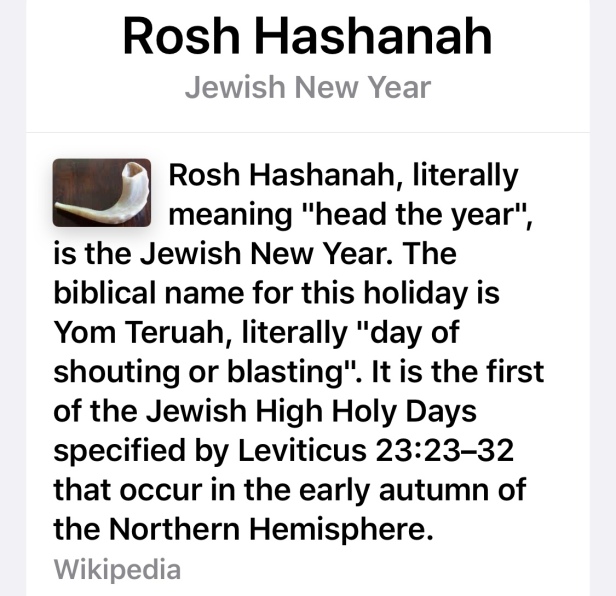  Psalm 81:1 (To the chief Musician upon Gittith, A Psalm of Asaph.) Sing aloud unto God our strength: make a joyful noise unto the God of Jacob. 2 Take a psalm, and bring hither the timbrel, the pleasant harp with the psaltery. 3 Blow up the trumpet in the new moon, in the time appointed, on our solemn feast day. 4 For this was a statute for Israel, and a law of the God of Jacob. (KJV)

Obviously a trumpet was to be sounded to mark the feast day and the new moon.

So there is possibly a good argument for this belief. It represents a new start, a new year. It in fact fits neatly with scriptures description of the last recorded trumpet of scripture found in Rev. 11:

Then the seventh angel sounded; and there were loud voices in heaven, saying, “ The kingdom of the world has become the kingdom of our Lord and of His Christ; and He will reign forever and ever.” And the twenty-four elders, who sit on their thrones before God, fell on their faces and worshiped God, saying, “We give You thanks, O Lord God, the Almighty, who are and who were, because You have taken Your great power and have begun to reign. Revelation 11:15-17 NASB

The sounding of this trumpet sets in motion Christ’s reign. The fact that Christ has come is made clear in this passage. Listen to these words: “who are and who were,” this statement is made in other places in scripture, but it always has added to it what is obviously missing here. What is missing is “and who art to come”. Why would this be missing? Because this has just described that He has come and begins to reign. It is at His coming that there will cease to be a dead man left in the earth who is in Christ who has not been raised at His coming.

There was a question raised above, that is not yet fully answered.

How does the Holy Spirit teach us? First we know that the Holy Spirit is the inspiration behind the scriptures. The modern day traditions do not represent the ancient biblical practice for blowing trumpets on Rosh Hashanah. There is no indication in scripture and certainly not from ancient Israel’s history as to how many trumpets were blown at this feast. You can read about this ancient history in The article excerpted from Entering the High Holy Days. Which was reprinted from the Jewish Publication Society with permission.

One thing that we must remember is that men will speculate on these things, but the Bible is our source of truth. The number of trumpets blown in Moses’ and in Joshua’s day is not know to us today. But I would bet that the Holy Spirit knew when He and our Lord Jesus inspired the Revelation, and at that time taught us concerning the coming of the Lord. The last Trumpet is really all that matters.