Why is the promise important? There are those within the faith who claim that this footstool for our Lord is already established — is it? What would be the implication if this is actually a present fulfilled promise?

It must first and foremost mean that all enemies of Jesus are under His control. Which if true would have far reaching implications. How so? It would of necessity mean that Jesus is now directing the evil, the pain, the suffering that currently exists within this world in order to what?

The scripture tells us that all things work for good to them that love Him and who are called according to His purpose. But all do not love Him, even if we would be able to conclude that all men are called according to His purpose, still not all love Him. So if He is the director of evil toward those who do not love Him, for what would be its purpose? It based on this verse would have to be for the good of those who do love Him. So He would be the director of evil not only toward those who reject Him (His enemies and ours) but toward us through them as well. There is no doubt that God does and will unleash evil in this world for His purposes, but those purposes are pure, but all evil is not pure for His purpose.

It is, in fact, the evil of this world that seeks to destroy the very people that God seeks to serve Him. And He tells us to love our enemies, to pray for them. Jesus tells us that God so loved the World. Part of the blessed hope of the believer is that one day justice will come into this world. That one day God’s will will be done here on earth as it is in God’s heaven. Another part of our blessed hope is that one day death will be defeated and resurrection will occur. But how can justice come to a world where the judge is the director of its evil? In fact the greatest argument in opposition to Jesus now having received this promise to place His enemies as His footstool is contained in a future defeat of death.

For as in Adam all die, so also in Christ all will be made alive. But each in his own order: Christ the first fruits, after that those who are Christ’s at His coming, then comes the end, when He hands over the kingdom to the God and Father, when He has abolished all rule and all authority and power. For He must reign until He has put all His enemies under His feet. The last enemy that will be abolished is death.

If death is the last enemy defeated, and if it’s defeat will mean its end; then we must conclude and consider that all other enemies will also come to an end within the kingdom handed to the Father following Christs reign. For He will reign until. Resurrection will occur at the beginning of His reign:

Then the seventh angel sounded; and there were loud voices in heaven, saying, “ The kingdom of the world has become the kingdom of our Lord and of His Christ; and He will reign forever and ever.” And the twenty-four elders, who sit on their thrones before God, fell on their faces and worshiped God, saying, “We give You thanks, O Lord God, the Almighty, who are and who were, because You have taken Your great power and have begun to reign. And the nations were enraged, and Your wrath came, and the time came for the dead to be judged, and the time to reward Your bond-servants the prophets and the saints and those who fear Your name, the small and the great, and to destroy those who destroy the earth.”

Those enemies who remain therefore must be outside the kingdom, and they must remain for eternity in a state of suffering.

Not until then will His enemies all be under His feet and the kingdom turned over to His Father and ours.

Death was levied upon mankind as a penalty for sin. Almost all of mankind will have felt this impact of sin, but only those who are in Christ will be released from that penalty, and only those mortals found to be worthy of eternal hell based on their sin will be judged with immortality as their punishment for that sin before death is finally destroyed — this following the Great white throne judgment. Otherwise God’s Justice would not be possible to pass out in a just fashion, and He is the Just Judge. 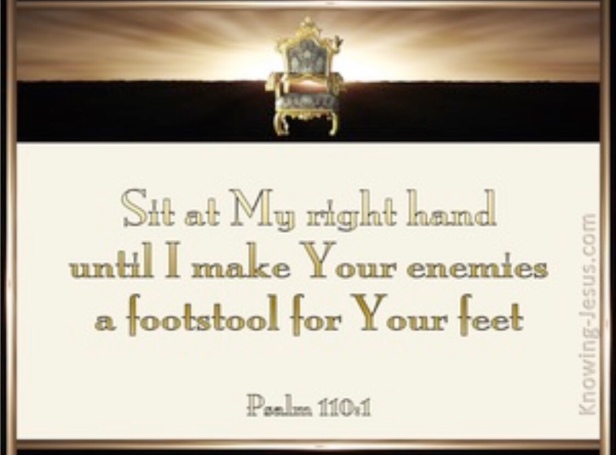