If what Jesus states in Rev 22 is believed then one must seriously question Rev 4:1’s association with the Rapture. Listen first to what Jesus says:

Revelation 22:18 For I testify unto every man that heareth the words of the prophecy of this book, If any man shall add unto these things, God shall add unto him the plagues that are written in this book:

So one must ask: in order for someone to state that Rev 4:1 is the Rapture, then there must be Scriptural proof of its having some tie to the rapture. And of course, this is what is stated to be fact. So to be sure that this is or is not correct ask yourself can this understanding of Rev 4:1 be backed with scripture? And can it be done without adding to or taking away from what is actually stated in the actual content of Rev 4:1? Listen: 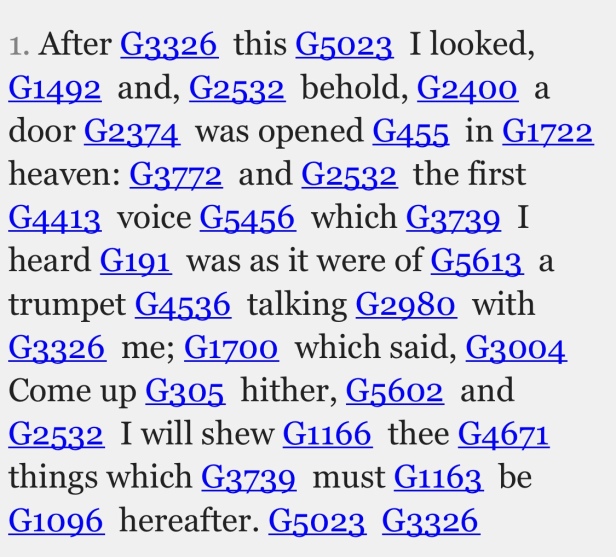 Notice that in this verse a voice is speaking to John. The voice is reverberating as a trumpet, or like a trumpet. What is not mentioned is the Resurrection, or the Lord descending with a Shout. Nor is there an actual trumpet blast accompanying the voice. All of these things are major ingredients of the catching up of the church. And they would proceed the Rapture if this were its timing on God’s calendar. Since these things are missing one must ask: is this verse being added to? The verse actually has a very clear meaning of its own that describes what is actually happening to John.

There are other considerations, of course, that should be made when dealing with the Dispensational argument.

Yesterday’s post dealt with the Rev 3:10 argument, and should be read if you have not already done so. But tying these two together in the Dispensational argument is the phrase “after these things”. This phrase is located in the verse we are considering. If you are of the opinion that the Revelation is meant to be historically sequential, and is meant to lay out the history of the church followed by a period of history excluding the church; then you would believe that the Tribulation is equivalent to the Wrath of God from which we are protected. And you would then point out that the bowls of wrath in Revelation 16 would confirm this fact. You would also point out other incidents of wrath scattered throughout the Revelation.

The argument proceeds as follows “after these things” is stated in the Revelation each time that there is an intent to reveal the next stage in John’s vision depicting the next phase of Tribulation’s progression, and each of these stages then would be sequential events on God’s clock. For those of you who believe in this sequence there is a fatal flaw, because beyond Rev 4 verse 1 and through Rev 19, there is a 7 year time span revealing the coming of Christ to be associated with each of the encounters with wrath. A sequencing of these events would place the bowls of Wrath at the very end of the 7 year Tribulation, which is exactly where the post Trib scholars place these bowls. And which is where each of the recorded incidents of wrath align themselves. Which would mean that the Tribulation does not equal God’s wrath. It can be argued that Tribulation does equal a form of discipline or even Judgment meant to elicit repentance; but Wrath is not present until very late in the game, and the wrath that we will escape is even later, and is always in those 14 chapters beginning with chapter 4 associated with Messiah’s Coming and His deliverance.

An example of the fact that sequence is not the emphases of the Revelation, consider: Rev 14:13-20, is a picture of the end time, but Vs 13 is very different in its message than verses 14-20. Verse 13 speaks of men/women who throughout this period of Satan’s wrath lay down their lives for the Lord, yet 14-20 speaks of the the reaping of the harvest at Jesus Coming. First there is the Rapture, then the harvest of the wicked into the wine press. Even if you believe that the Rapture is pre-Trib, you still must admit that this is not a purely sequential book based on these verses.

For more on this in addition to yesterday’s recommendation, see my post: Messiah Stains His Garment Isa 63, sept 25, 2017.

5 thoughts on “Revelation 4:1: Does It Mean Rapture? How Can We Know?”