Genesis 2:7 And the LORD God formed man of the dust of the ground, and breathed into his nostrils the breath of life; and man became a living soul. (KJV)

My question for you is this — Did God’s gift of life in creation carry with it an eternal promise of life? Genesis is the book of beginnings. It is important to understand the foundation that God laid down for mankind in order to understand what is built upon that foundation.

Genesis 2:9 And out of the ground made the LORD God to grow every tree that is pleasant to the sight, and good for food; the tree of life also in the midst of the garden, and the tree of knowledge of good and evil. (KJV)

In the midst God placed two trees, and therein was the foundation laid for man to choose between pleasuring himself or pleasuring God through obedience to God. The gift from the tree of life was there for them, and it was freely offered. The only prohibition was the tree of good and evil.

Satan made one critical mistake; or did he? He is the deceiver after all.

The kingdom of heaven for which Lucifer was originally created, before sin was found in him, is of course eternal. When Lucifer sinned he was cast from permanent residence in the kingdom, but he himself along with his angels had been created for eternities future. Man being earthly was created with a soul that could die.

Genesis 2:15 The Lord God took the man and placed him in the orchard in Eden to care for it and to maintain it. 2:16 Then the Lord God commanded the man, “You may freely eat fruit from every tree of the orchard, 2:17 but you must not eat from the tree of the knowledge of good and evil, for when you eat from it you will surely die.” (NET)

If Satan would have first enticed man to eat of the tree of life; then man would have been immortal. Man’s choice to eat from good and evil cost him what up to that point was freely his — immortality. The tree of life was not forbidden to him. And it still is not, but access to it now only comes now through Messiah. Jesus says: “I am the way and the truth and the life, no man comes to the Father but by Me”.

So, what happened when man chose to eat from good and evil? Man was a living soul and he was living flesh. Genesis 2:17b for in the day that thou eatest thereof thou shalt surely die. (KJV). But man was more than that. He possessed spiritual life that enabled communion with His creator.

His flesh did not die that day, but it began to die. His God breathed soul did not die that day, for had it there would have been no reason to protect him from the tree of life, which God proceeded to do. His soul lived on to later reside in Sheol when his body died. But his spirit, his connection to God did die in that it was no longer connected to God, and in that sense without God became mortal; therefore Jesus says: “you must be born again” (John 3) and according to The Word that means you must be born of the Holy Spirit.

Adam spiritually died that very 24 hour day. He later physically died at an age of less than 1000 years, which is a Day unto the Lord. So both the Spiritual and physical death were accomplished by man through sin in one day. God did not deceive man, Satan did. The Spirit died in man immediately in the day that Adam sinned. The flesh died slowly in one of God’s days. Immortality was stolen from man by Satan, and is only restored by the Spiritual rebirth of man through believing in Jesus.

So man’s spirit died, and His flesh eventually died, what of the soul? Scripture says: Ezekiel 18:20 The soul that sinneth, it shall die. The son shall not bear the iniquity of the father, neither shall the father bear the iniquity of the son: the righteousness of the righteous shall be upon him, and the wickedness of the wicked shall be upon him. (KJV)

The original Hebrew word for soul in this verse is the same as in Genesis 2:7. It is the same word for soul that is quoted as such over 400 times in the KJV. So definitely the soul shall also die, but scripture teaches soul sleep. Jesus though He died physically, He did not die Spiritually. Nor did His soul die. He was without sin. His soul is immortal. He is God. But in every aspect man is mortal. The rich man in the story told by Jesus was therefore a dying soul in hell, for He was an unsaved sinner. His eternal punishment was surely death; for the body, soul and spirit of man without Christ is mortal.

30 If your right hand makes you stumble, cut it off and throw it from you; for it is better for you to lose one of the parts of your body, than for your whole body to go into hell.

If Jesus is not your righteousness, then you will pay for your own sin. Today man without Christ will before the resurrection and after death be without a physical body, but he retains a spirit body and soul which will be joined in Sheol (hell) by his resurrection physical body after the judgment.

Immortality is the gift of God to those born again Spiritually in Messiah. God’s stated judgment is death to man without Christ, so when there is immortality in Hell it must be due to a judgment earned by man’s own vast degree of immorality; and it is administered justice from a Just God. This seems to be the teaching in scripture to be such for unsaved men, as every man will be judged for his own sin. Listen closely to Paul’s words to Timothy:

1 Timothy 6:12 Fight the good fight of faith, lay hold on eternal life, whereunto thou art also called, and hast professed a good profession before many witnesses.

1 Timothy 6:13 I give thee charge in the sight of God, who quickeneth all things, and before Christ Jesus, who before Pontius Pilate witnessed a good confession;

1 Timothy 6:14 That thou keep this commandment without spot, unrebukeable, until the appearing of our Lord Jesus Christ:

1 Timothy 6:15 Which in his times he shall show, who is the blessed and only Potentate, the King of kings, and Lord of lords;

1 Timothy 6:16 Who only hath immortality, dwelling in the light which no man can approach unto; whom no man hath seen, nor can see: to whom be honour and power everlasting. Amen. (KJV)

God, alone is in possession of immortality, we cannot see it from the past, only as a gift will we see its future. Without God’s gift, Destruction in the lake of fire is decreed for most men. Read the prior post on Hell for more Scriptural insight.

Posted on WP — Is Eternal Punishment in Hell Scriptural? — yes and no 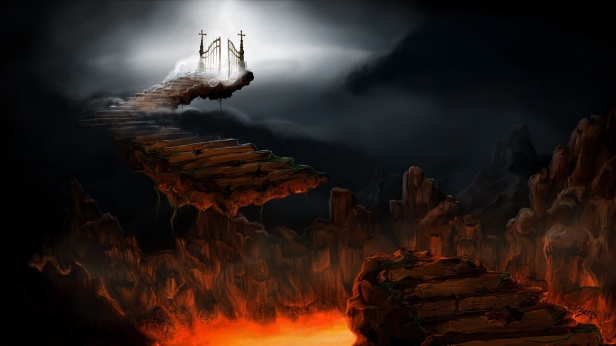