The way most premillennial scholars interpret prophecy is very different than their believing brothers. Even the historic premillennial such as myself disagrees with the Pre-Trib. understanding. And when it comes down to it, it is primarily due to the scripture’s teaching on the resurrection — which actually controls the Rapture’s timing. Listen to Paul in the next scripture, and then I’ll attempt to illustrate.

Paul states it this way:

But we do not want you to be uninformed, brethren, about those who are asleep, so that you will not grieve as do the rest who have no hope. For if we believe that Jesus died and rose again, even so God will bring with Him those who have fallen asleep in Jesus. For this we say to you by the word of the Lord, that we who are alive and remain until the coming of the Lord, will not precede those who have fallen asleep. For the Lord Himself will descend from heaven with a shout, with the voice of the archangel and with the trumpet of God, and the dead in Christ will rise first. Then we who are alive and remain will be caught up together with them in the clouds to meet the Lord in the air, and so we shall always be with the Lord.

The pre-Trib doctrine requires that the dead in Christ be separated into two groups. The two groups would be today’s saved (in Christ), and the saved (in Christ) of the Tribulation. This scripture does not teach that. It is emphatic that the dead in Christ rise then the Rapture of those who are alive and remain. In fact, it is emphatic to the point that God brings back the dead in Christ with Christ at His Coming. Saints return with Christ at the second coming. They meet their resurrection bodies on the way down, but they come before those who are alive are caught up.

The Holy Spirit speaking through Paul does not make this separation, either here or in 1 Corinthians 15. In both places those who are alive and remain do not precede the resurrection of the dead in Christ. This is the teaching of scripture concerning the resurrection and Rapture. If even one of the dead in Christ dies after the Rapture, then this scripture must have a Scriptural explanation elsewhere to clarify why all of the dead in Christ do not resurrect before the catching up. Yet this and 1 Corinthians 15, are the scriptures that pre-Trib scholars use to teach on the pre-Trib Rapture. There is no other explanation of this.

The place that Jesus is preparing for us is for Both Jew and Gentile, His bride, and it is not revealed until after the Millennium. His emphasis is on our being with Him where He is. When He returns we will be with Him ruling from the earthly Jerusalem. The New Jerusalem (our prepared place follows the Millennium.

They attempt to divide the church and Israel in there efforts, when there is no Scriptural division of Jews and Gentiles in the New covenant. Even under the Old Covenant there was no division between believing Jews and believing Gentiles. They all were part of Israel. Today is no different — all are in Christ — Israel’s Messiah. In the Tribulation all will be in Christ as well. There is no salvation apart from Christ. There is no other gospel. There is no resurrection even for the Old Testament saints apart from Christ who when He entered paradise He set them free (Led captivity captive Ephesians 4). During the Millennium all will reign with Christ when He tabernacles with us in Jerusalem.

I have done much teaching on this WordPress site over the last two years, since the book came out. In this teaching I have refuted with scripture every argument presented by the pre -Trib camp. You must ask yourself where is the scripture stating that the rapture occurs before the second coming?

All of the arguments are based on definitions (some of which do not even exist) of a given word. Words over which we are told that there should be no argument. — why? The simple answer is that each word has a given definition. To change a definition creates argument. The word arguments are made by pre-Trib scholars and deal with the following words and how they are represented.

These are all important words which have meaning. But word meanings are changed or ignored to suit what is a new doctrine or doctrines beginning in the 1800’s. The following simple chart depicts what Paul says and what pre-Trib theology says. 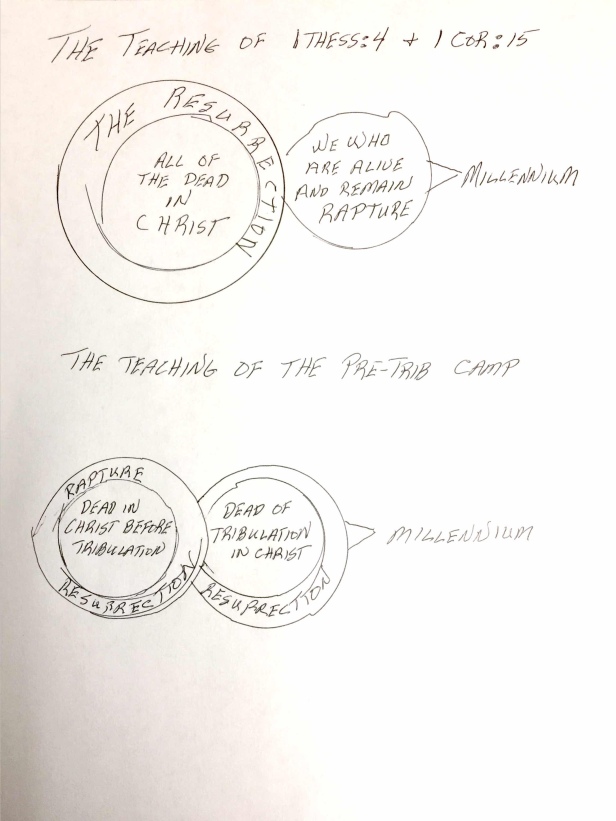 I know I’m no artist, but if you study these two passages you will come to understand which of these two presentations of Paul’s description is correct. Both cannot be correct. One is a lie, and the question you must ask is who will benefit from that lie when the time of Tribulation is upon mankind? It may not matter to you today. Family members are not saved but they will get a second chance — won’t they?

Ask yourself one other question. Is the comfort coming from these verses in 1 Thess. stated to bring us comfort due to the fact that the dead in Christ will live again when He comes? Or is it stated in order that we will escape the actual time of the Tribulation should we happen to be here during that time, and then many will have a second chance? And remember both scenarios understand that we in Christ will not experience God’s wrath. Why, because God’s wrath is not the Tribulation. All men outside of Christ are appointed for God’s wrath. This is scriptures teaching. But most teachers don’t tell you that do they?