God’s “Orge” wrath vs “Thumos” wrath. Yes there are two Greek words in the original text that are translated “wrath” in our Bible. Why is it important to know this?

Believers are promised as the body and bride of Christ an escape from (Orge) wrath.

Wrath using either Orge’ or Thumos is recorded 39 times in the New Testament.

14 of those times in Revelation Orge’ and Thumos are used.

Otherwise, 25 times, but there are 24 uses of Orge’ and only one use of Thumos in the balance of the New Testament.

2 times Thumos is used with Orge in the same verse where it is translated either anger or fierce.

5 times in Revelation orge’ is translated wrath and in each time it is used in conjunction with the Lord’s coming, and each time there is evidence that it is following the Tribulation.

Orge is one of the two Greek words translated Wrath in scripture. As stated both words are used in Revelation. There is no promise in scripture telling us that we will escape from (Thumos) wrath.

Each time that Orge wrath, which we are promised to escape as believers in Christ Jesus, is inserted into the Revelation text it is in relation to Christ’s rule, His reign and His Second Coming. And more especially it is related to the treading of God’s wine press of Orge wrath. In fact Paul in Romans makes clear when this wrath is to be satisfied.

Rom. 9:22. What if God, willing to shew his (Orge) wrath, and to make his power known, endured with much longsuffering the vessels of (Orge) wrath fitted to destruction:

This wrath is orge in both instances in this verse, and is the wrath we will escape.

But (Thumos) wrath is seen during the time of great Tribulation. It is seen first in Revelation 12 associated with the Red Dragon Satan and his wrath (Thumos) against those who are at the time of its occurrence believers in Jesus. “They overcame him by the blood of the lamb and by the word of their testimony.”

Then again Thumos is seen in Revelation 14 against the worshippers of the Beast, and at this time it is Thumos from God.

What we see following Revelation 14 Thumos is the seven bowls of Thumos wrath in Revelation 16.  And interestingly enough the bowls of Thumos, which are also of course from God, seem to merge at the end of the seventh bowl into God’s  (Orge) wrath as Messiah returns and treads the wine press. What we hear is this:

Revelation 16:17, 19 Then the seventh angel poured out his bowl (remember this bowl is Thumos) upon the air, and a loud voice came out of the temple from the throne, saying, “It is done.” 19 The great city was split into three parts, and the cities of the nations fell. Babylon the great was remembered before God, to give her the cup of the wine of His fierce (Orge) wrath. This is actually the fulfillment of what is seen in Rev. 14:10. Revelation 14: 19 then sees the wicked thrown into the wine press of God’s wrath and this is after the reaping which is obviously the Rapture that we have just seen in ch 14: vs. 15&16. Thus the pouring out of the bowls seems to be leading to the culmination of God’s wrath in this age.

Here is what scripture says again concerning Thumos wrath:  Revelation 15:1 Then I saw another sign in heaven, great and marvelous, seven angels who had seven plagues, which are the last, because in them the (Thumos) wrath of God is finished. But we might then ask — is God’s Orge also finished?

We don’t see Orge wrath occur in it’s time sequence in the Revelation until after the seventh Bowl of Thumos is poured out; because, again, it seems to only be seen in John’s visions in conjunction with the presence of the Lord and the treading of the wine press. Both of these involve Jesus’ second coming. We know He comes in wrath: Revelation 6:16 and they *said to the mountains and to the rocks, “Fall on us and hide us from the presence of Him who sits on the throne, and from the wrath (Orge) of the Lamb; this is also confirmed in Revelation 14:19-20 So the angel swung his sickle to the earth and gathered the clusters from the vine of the earth, and threw them into the great wine press of the wrath (Thumos) of God. And the wine press was trodden outside the city, and blood came out from the wine press, up to the horses’ bridles, for a distance of two hundred miles.

We see further confirmation of this timing for the hour has come that we are to be raptured, so Orge is not yet poured out.

Revelation 14:15 And another angel came out of the temple, crying out with a loud voice to Him who sat on the cloud, “Put in your sickle and reap, for the hour to reap has come, because the harvest of the earth is ripe.”

There is the first mention of Orge wrath — the wrath that we will escape — in Revelation 6:16-17 and they *said to the mountains and to the rocks, “Fall on us and hide us from the presence of Him who sits on the throne, and from the wrath of the Lamb; for the great day of their wrath has come, and who is able to stand?”

Before Orge wrath is poured in Revelation what is interesting is what seems to occur with the sixth bowl, for with it Satan is empowered to draw the nations to Armageddon. But at this time (the time of Armageddon), Jesus takes action in this battle.

Isaiah 63:1-6 Who is this who comes from Edom, With garments of glowing colors from Bozrah, This One who is majestic in His apparel, Marching in the greatness of His strength? “It is I who speak in righteousness, mighty to save.” Why is Your apparel red, And Your garments like the one who treads in the wine press? “I have trodden the wine trough alone, And from the peoples there was no man with Me. I also trod them in My anger And trampled them in My wrath; And their lifeblood is sprinkled on My garments, And I stained all My raiment. “For the day of vengeance was in My heart, And My year of redemption has come. “I looked, and there was no one to help, And I was astonished and there was no one to uphold; So My own arm brought salvation to Me, And My wrath upheld Me. “I trod down the peoples in My anger And made them drunk in My wrath, And I poured out their lifeblood on the earth.”

These prophetic verses are critical to our understanding. Jesus comes and treads this wine press of wrath alone, and in doing so He stained His garments. So He has come back alone during Armageddon –why?  I answer this in my book, I can’t give you all the answers here.  If you to read the book you will help me spread this word.  But I will tell you this — Jesus garments are still covered with this blood when He returns with His saints (no longer alone) in Revelation 19 in blood stained garments to complete a work that He already started in Edom in the wine press when He stained those garments.

There are actually 4 places in Revelation where His second coming is seen and Orge wrath occurs in each of these visions given to John.

The first is Revelation 6:16-17. “and they said to the mountains and rocks, “Fall on us, and hide us from the face of Him that sitteth on the throne, and from the wrath (Orge) of the Lamb! For the great Day of His wrath (Orge) is come, and who shall be able to stand?”

If you have read my book you know that the day of the Lord comes when Jesus returns with this wrath that we are promised to escape — Orge.  You also know that this occurs following the darkening of the sun moon and stars which is a scriptural sign given by Jesus; a sign that is recorded just before these verses in Rev: 6:12&13.  We see Jesus and Joel both give us this sign for our understanding. Mark 13:24-26, Matt. 24:29, and Joel 3:12-16.

The second time Orge wrath occurs is in Revelation 11:18 “And the nations were angry; and Thy wrath (Orge) is come, and the time of the dead, that they should be judged, and that Thou shouldest give reward unto Thy servants the prophets, and to the saints and them that fear Thy name, small and great, and shouldest destroy them that destroy the earth.” NASB

This verse interestingly follows the announcement of the beginning of the reign of Christ. He who is to come has come. The original text says that this is God the Almighty “who art and who wast”, but it leaves out “and who is to come” because at this time in this vision it is obvious that He has already come. Rev 1:4 John to the seven churches which are in Asia: Grace be unto you, and peace, from him which is, and which was, and which is to come; and from the seven Spirits which are before his throne; always before He comes it is said of Him that He is to come.

The third time Orge appears is in Revelation 16:19 NASB “The great city was split into three parts, and the cities of the nations fell. Babylon the great was remembered before God, to give her the cup of the wine of His fierce (Orge) wrath.”

This announcement comes following the pouring out of the seventh bowl of Thumos wrath. And thus as I said earlier, the bowls Thumos seem to feed God’s Orge wrath when Jesus comes.

The forth time Orge is mentioned is Revelation 19:15 NASB. “From His mouth comes a sharp sword, so that with it He may strike down the nations, and He will rule them with a rod of iron; and He treads the wine press of the fierce wrath (Orge) of God, the Almighty.

So it would seem that God has given us another piece of the DNA to tell us His timing for end time events, and of what we will see before He removes us from His Orge to come.

I have written a book that is the result of much study, and quite honestly I am having difficulty knowing just how to get its message out. I believe that God wants me to do just what I am doing here and that is to ask you (if you have gotten anything from this message yourself) that you would then forward it to your Christian friends who are interested in our times, times which are now ripe with fulfilled prophetic events. I would appreciate your help and I believe God will also. You will notice I am not promising you some blessing or miracle for doing this because that is not how God works. But I do promise you that the proceeds from the sale of this book will be put back into our lords work until He comes.

Jerry Parks, author of And Then The End Shall Come. 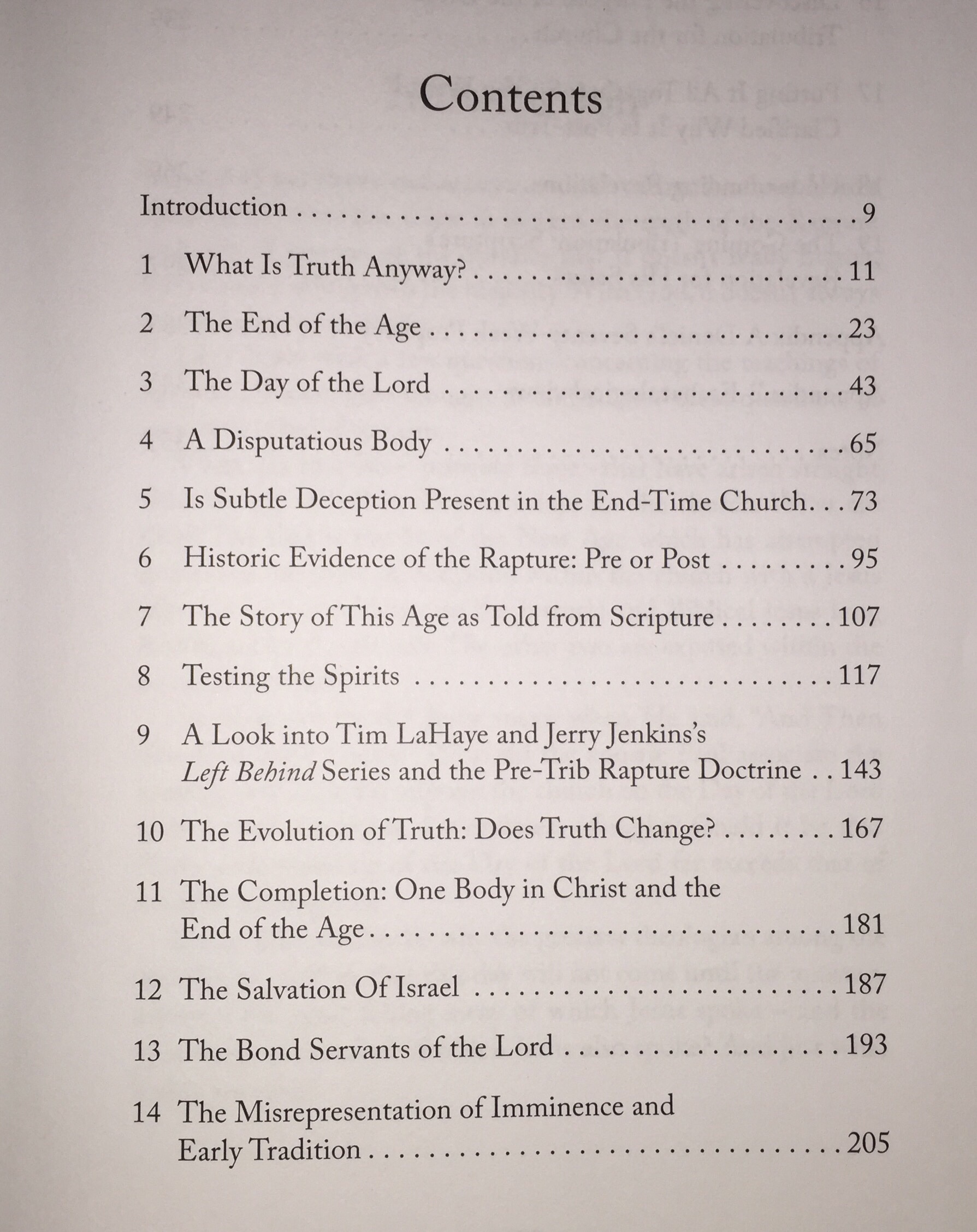 9 thoughts on “What — You Need To Know About God’s Wrath. By Jerry Parks, author of And Then The End Shall Come.”